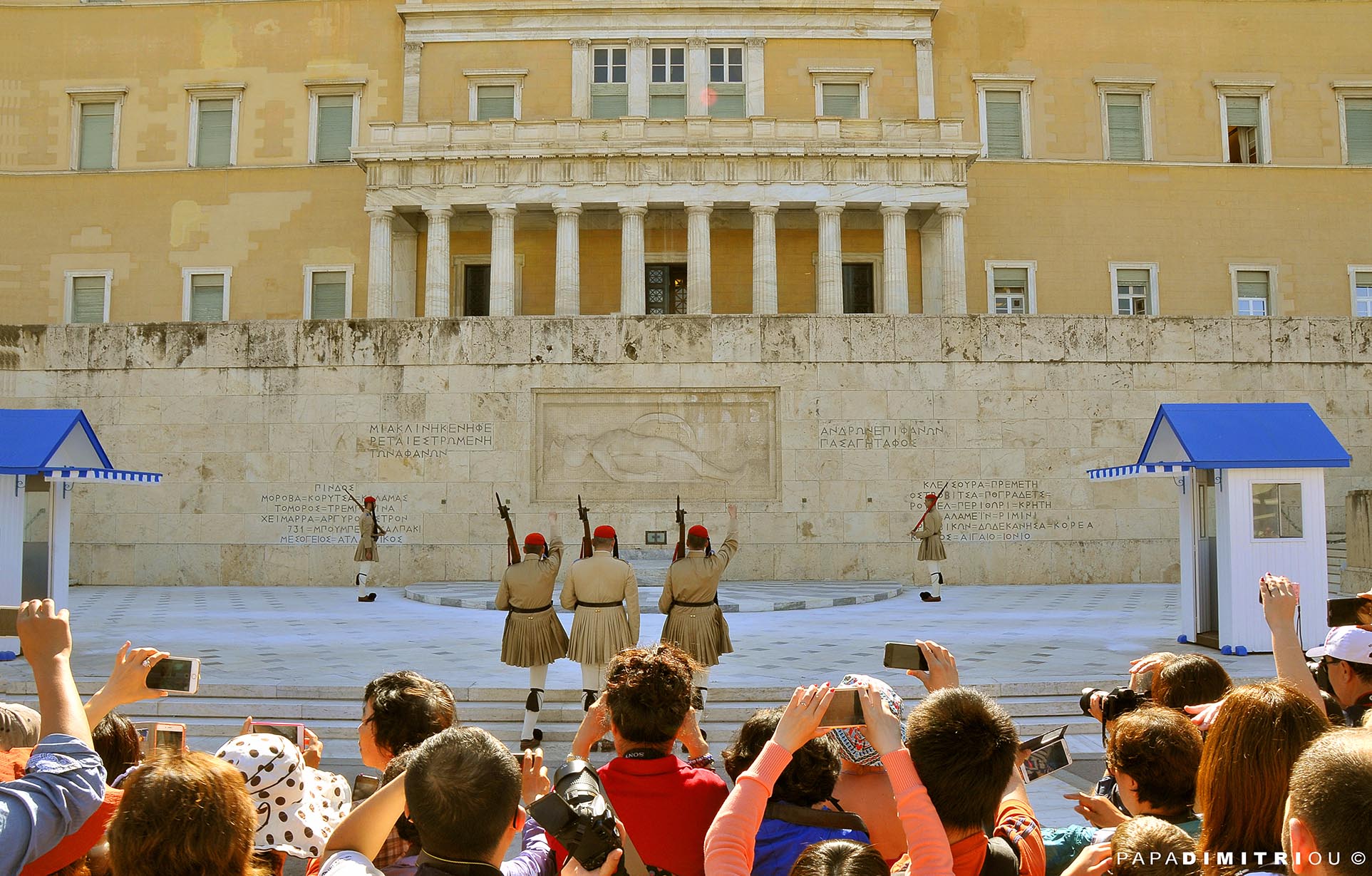 The “heart” of Athens!

Athens, like every big city in the whole world, has a certain spot – a benchmark – which serves as the ideal starting point for the discovery of the essence, the beauty and the history of the City.
This special point is Syntagma area and is considered as the historical center of Athens.
It’s landmark, is the beautiful namesake square, decorated by a lovely fountain and a majestic marble staircase which leads to the Amalia avenue.
Right across the avenue, lies the Greek Parliament and in front of it, the impressive Tomb of the Unknown Soldier, guarded by the Evzones, the elite troops of Greece.

The history of Syntagma square and the Parliament building, as well as most of the buildings surrounding them, is actually the modern history of Athens and Greece in general!
Until 1834, the area was just the eastern boundaries of the city of Athens.
King Otto, after moving the capital of the newly born Greek Kingdom from Nafplion to Athens, decided to construct here, a square and the Royal Palace (nowadays, the Parliament building). The square was initially named “Palace Square” and it’s name changed to “Syntagma sq.” (Constitution square) after the declaration of the Greek Constitution of 1844, which King Otto was forced to proclaim, due to the rebellion of the military garrison of Athens and the Athenians.

Another dominant building, with rich history, is the building which nowadays and since the end of the 19th Century, houses the hotel Grande Bretagne opposite the northern part of the square: Built in 1842, initially as the mansion of a wealthy businessman (Antonis Dimitriou), it was one of the first buildings in Greece to have electricity installed in 1888. During the Greco- Italian war in 1940 – 41, the building housed the Greek General Headquarters. During the German occupation, it housed the Nazi’s headquarters; after the end of the occupation, the British forces headquarters and during the early stages of the Greek civil war, it housed the Prime Minister Georgios Papandreou, the Council of Ministers and the British military assistance force.

To the west, Syntagma area borders with the old part of Athens, the Plaka and the lovely National Garden (former Royal Garden), a green oasis of 38 acres, with over 500 species of plants.
On the eastern part of Syntagma square, you will find the main entrance to one of the most beautiful metro stations in the world, the namesake “Syntagma” Station. This four story station operated for the first time in January 2000 and serves two metro lines. It also houses an interesting small museum featuring a variety of items unearthed during the process of building the metro.

In the middle of the western end of Syntagma square, starts the pedestrian street Ermou, which is the major shopping area of Athens. It’s a street definitely worth walking along, at least once! Always busy, but yet somehow, never really crowded, this wonderful street is surrounded by beautiful shops selling mostly shoes, clothes, accessories and cosmetics. Ermou is intersected by small alleys, which will lead you to even more shops, selling all kinds of stuff ranging from dried nuts to books or sewing supplies, small cafes and restaurants.
If you follow Ermou for approx. 450 meters, you will come upon the church of Panagia Kapnikarea, one of the oldest and most beautiful churches of the city, built around 1050 A.D.

“Stadiou” is the name of the one-way major street that links Omonia square with Syntagma square. It is located in the northern lower end of Syntagma square. Following Stadiou street, you will come upon the National History Museum, housed in the beautiful neoclassical building of the old Parliament and “guarded” by the statue of Theodoros Kolokotronis, a Greek general and the pre-eminent leader of the Greek war of independence against the Ottoman Empire (1821 – 1829).

The avenue that intersects Amalia Avenue, right at the corner of the Parliament block, is Queen Sophia’s avenue.
On a sunny day, indulge yourself with a walk along this beautiful avenue: Walk past the old flower shops set at the corner of the Tomb of the Unknown Soldier and known also as “the Parliament’s flower shops”. Yes, even these small shops possess a rich history, as they were opened together with the unveiling of the monument of the Unknown Soldier in 1934 and they served the people who were depositing flowers at the monument, for their lost family members.

It takes a visit to the marvelous Syntagma area, in order to realise that Athens, can become your home away from home!

Don’t miss the changing of the guards that takes place every day on the hour. On Sundays at 11am the ceremony is more festive.

Read more about the Evzones and the meaning of their uniform and we suggest you book a tour and get a professional licensed guide take tou there.

The most colorful district of Athens, Plaka, is also known...
Areas

A kiss has recently become the talk of the...